Barak-Mhornar, the City of Shadows, is one of the six major sky-ports of the Kharadron Overlords, sailing high in the Realm of Chamon. Midnight blue is the standard colour for the armour and uniforms of those that sail from the City of Shadows. [1]

The City of Shadows has a dubious reputation amongst the Overlords, often labelled pirates or worse by other duardin of their rival sky-ports, they are also well known for their ability to interpret the Kharadron Code to their own advantage. The code has even been adjusted several times to try and halt actions carried out by the privateers of the Barak-Mhornar. They are also well known for their special optics that grant superior night-sight and unusual tattoos.[1] 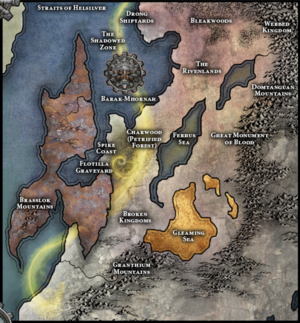 Barak-Mhornar last seen location before its departure for the Shadowed Zone.

During the Age of Sigmar Barak-Mhornar was hidden within the Shadowed Zone to the north of the Charwood Forest and east of the Rivenlands.[1]

In the Age of Sigmar the sky-port is raided by the Much-great Sky-kill Air Armada commanded by the skaven Warlock-Admiral Steelklaw. [3a]