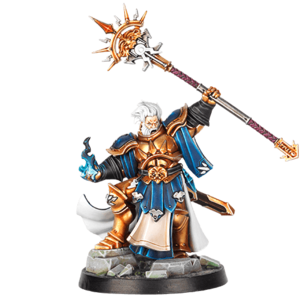 Averon Stormsire is a Knight-Incantor of the Hammers of Sigmar that leads the Stormsire's Cursebreakers. He is a specialist in destroying curses and dark enchantments, unbinding and banishing. He is one of Sigmar's most trusted arcane agents and an expert on the negative effects of Reforging.[1][2][3]

He is a wizard, capable of casting the Stormsire spell and of the Lore of the Storms. He carries spirit-filled flasks, that can be smashed to create a deadly explosion of soul energy, and a Voidstorm scroll, infused with void magic allowing for one to easily unbind magic.[1][2]

He was chosen personally by Sigmar to study the curse of Shadespire to fix the issues with reforging. At first he considered such job a distraction, that would only lead him to failure, but on closer examination of the curse and the Shadeglass he has gained some hope. Together with his companions he searches for a way to break the curse that torments the city, and ease any who tries to stop them with their magical powers.[1]