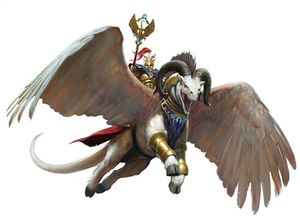 Aventis Firestrike is a Lord-Arcanum of the Hammers of Sigmar and the Magister of Hammerhal. His original name was Avante Fireson. His power over the magic of the Realms comes from a glowing coal of Aqthracite lodged deep within his chest, which his many acolytes say is the source of his famously foul temper.

When the flying citadels of the wizardly Agloraxi empire crossed the Flamescar Plateau during the Age of Myth, they came under attack from a host of Daemons of Khorne. In response, the ancient magi destroyed the daemonic beings in a rain of fire. This enraged the Blood God, who then swept his great reality-splitting blade across the skies of the Great Parch, all but destroying the Agloraxi. As a mortal Aventis, who was then known as Avante Fireson, was one of the few mages who can trace his lineage to that cataclysmic day and is a descendant of the few surviving wizards of that empire. [1]

As Avante Fireson he dedicated his life to fighting the worshippers of Khorne. With strength of arms, plotting and strategy, he became the bane of the worshippers of the blood god. Over the years he became known to them as the Fire Soul, a figure of hate and fear amongst the reavers of Khul's Ravage. Eventually, seeking revenge, they struck at the citadels of Avante's people. Dozens of towers were pulled down, and the families and serfs of his nation were hunted through the streets. After seeing pillars of smoke on the far horizon when returning from the war front, Avante hastened back to the city. Only to find it shattered and broken. [1]

Grief-struck and enraged, he took the Everburning Coal of primordial realmstone he had studied for years and consumed it whole, transmuting his body to a form of fire. Fighting down the pain he took human form once more and passed out, only to awake the next day shrouded in fire, but the flames did not harm him. From then on he learned to channel that power, incinerating all in his path. It was only when ambushed and killed by the mad headtakers of Khorne that Avante's rampage ended. But this would not be the end for him, for Avante had caught the eye of Sigmar in heaven. [1]

Taken by Sigmar, he was remade into a Lord-Arcanum in recognition of his incredible magical talent and power, he was then given the name Aventis Firestrike. A passionate soul and pure of heart, he forged friendships with celestial beasts as well as his fellow Stormcast. Especially with his Tauralon named Loithar, he convinced his celestial companion to go with him back to his homeland, forming a alliance. Since that day Aventis has won such acclaim that Sigmar has sworn him the Magister of Hammerhal. [1]