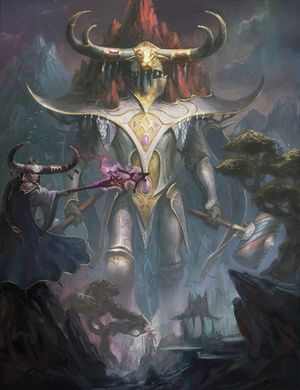 Animated from the Vertiginous Peaks of Ymetrica, the being known as Avalenor is an exceptionally powerful and unique Spirit of the Mountain. What makes the Stoneheart King so distinct is that no living being or soul truly knows his origin - he came to the Alarith temples fully formed and willing to fight for civilisation, having been convinced to do so by Celennar. It is theorised that Avalenor's unique nature stems from him being composed entirely of a naturally occurring form of Aetherquartz relinquished voluntarily by the mountains to defend Hysh and to keep it sacrosanct. [1]

Whatever the case may be, when the Stoneheart King enters a conflict, he can topple cities. He bears two dual hammers known as the Firestealers, which channel the worst of the freezing temperatures upon his peaks during the winters towards his enemies, turning it upon them and causing them to turn as black as if they had been a frostbitten corpse upon the mountain peaks for months on end. [1]

But the true power Avalenor holds is not his titanic strength, nor his glacial hammers - it is his knowledge and wisdom. As a being that has stood tall in the realms since they first formed, any who ask a worthy enough question to the Spirit will be given a truth that defines the cosmos. Any with the patience to earn his trust are sure to be enlightened for the rest of their living days. [1]