From Age of Sigmar - Lexicanum
(Redirected from Auralan Sentinel)
Jump to: navigation, search 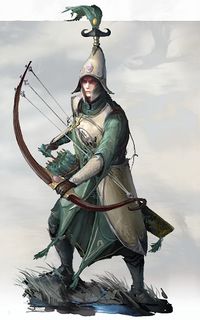 An Auralan Sentinel from Helon.

Auralan Sentinels are the archers of the Lumineth, who consider archery an art form as the bow is seen as a noble weapon in Hysh. The Archer can send an arrow straight and strike with killing force, its shaft flexing and counterflexing as it moves through the air to add a degree of punch to the strike. To strike from afar they will send their arrows high, lofting them so they curve back down in a trajectory that dips down sharply at the last moment allowing it to avoid the strongest points of armour.[1a] As part of the Vanari, units of Sentinels are able to harness magical energy to cast spells from the Lore of Hysh.[1a]

The High Sentinel that leads the unit can use Scryhawks to identify and engage enemies at extreme range using the ability to see through the eyes of their Scryhawk.[1a]

The standard bow of the Auralan Sentinels is the triple-stringed arcbow which is superior to those used by other races, their sunmetal tipped arrows cutting through their enemies' armor with ease. In addition each carry Vanari Daggers for defending themselves in close combat. The High Sentinel is armed with a Champion's Blade instead of bow and dagger and also carries a Scryhawk Lanterns which attracts Scryhawks allowing them to bond with the birds.[1a][2]