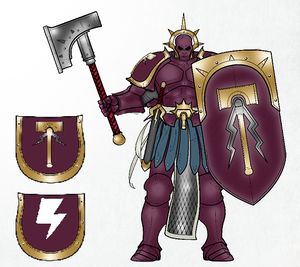 A Liberator of the Astral Templars.

The Astral Templars also known as The Beast-Slayers, Heaven's Claw, the Bane of Tyrants are a Stormhost of the Stormcast Eternals, wearing dark purple armor. The Astral Templars not only dared to enter the Gnarlwood, but returned out of the dark victorious. They suffer no monster or beastly abomination to live and their feral upbringing makes them very skillfull at hunting these beasts.[1][4][6a]

Each of them is a warrior born and their commanders are amongst the most ferocious of those. They are never more at home that when surrounded by enemies in battle, a trait their commanders take great delight in hurling themselves into the most desperate of combats.[4]

The Astral Templars are recruited from the most barbaric and warlike of the mortal tribes, skillful hunters with feral upbringings.[4]

The Astral Templars wear thick pelts and feral tattoos. Heads of monsters slain by them are preserved and displayed on the walls of their Stormkeeps.[6a]

The Astral Templars continue to honour the same totemic godbeasts they did as mortals carrying our rites around firepits. However among them the most prominent is Ursricht, the White Bear who they believe walks among them as a huge bearded man. [6a]

They Fought in the Stovinyan Shadowforest against the Skullfiend Tribe and their allies with the help of a great host of Seraphon for the Seven Stones of Rhael.[3]