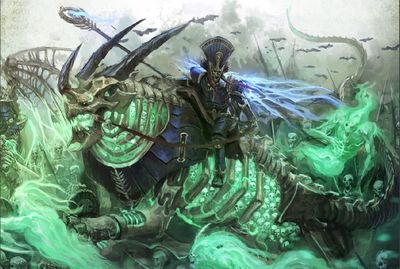 Arkhan the Black is the Mortarch of Sacrament.[1] Only Arhkan the Black is truly loyal to Nagash and it is he that the supreme lord of the undead often choses to lead his armies and carry out those tasks he would trust to no one else.[2]

Like the other Mortarchs, Arkhan has many names and titles including the Mortarch of Sacrament, Vizier to the Undying­ King, Hand of Death and the Castellan of Nagashizzar. [3a] The Daughters of the Underworld call him the Prince of Forgotten Deserts and the Lover of Night’s Queen. [3b]

Unlike many liches in the service of Nagash, Arkhan does not appear as a mere withered husk, striding forth in robes and armour of rich purple and gold, radiated a power second only to that of his master. As an animated skeleton he lacks any expression except a black-toothed rictus grin.[3a]

Nagash gave Arkhan the task of recovering the Realmstone of Shyish from the periphery of the Realm to its center. He sent thousands of skeletons in ant-like lines for centuries, each carrying a single grain from the edges to Nagashizarr. Even as Shyish was invaded by Chaos the Mortarch keep them busy with this task and this work was only completed well into the Age of Sigmar.[4]

Arkhan is seen once again as Nagash's first lieutenant in the new world created after the destruction of the World-that-Was. It seems that so long as Nagash exists, so shall his vizier.Needs Citation