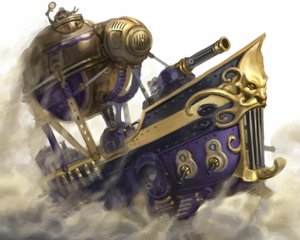 The Ironclad is an Arkanaut class airship, an evolution of the first vessels that took the Kharadron Overlords into the relative safety of the skies during the Age of Chaos.[1a] They are able to act as transports, heavy bombers or gunships depending on their complement and Admiral's wishes. Usually, Ironclads act as the flagship of a kharadron sky-fleet.[1b]

Built with large cargo holds, an Ironclad can also be used to transport Grundstok Thunderers or Arkanaut Companies. Whilst all the Sky-ports retain much larger and more specialised vessels, Arkanaut Ironclads are the largest warships commonly used by the Kharadron.[1c]

It had been believed that the Arkanaut Frigate was the largest vessel that could be held aloft by one single endrin, with multiples making the fuel required prohibitive for regular usage. With the development of a more refined aether-fuel and more powerful endrin, however, the Arkanaut Ironclad was made viable for mass usage.[1c]

All Ironclads are protected by multiple layers of riveted iron plate. Their armament includes bow-mounted Gas Carbines, Aethershock Torpedoes propelled by mini jet-endrin that detonate in a fireball and racks of Grudgesettler bombs or Detonation Drills. The forecastle is able to mount an Aethermatic Volley Cannon, Great Sky Cannon or a Skyhook and the much-feared Supremacy Mine. If the enemy closes with the ship, its crew can use Belaying Valves and Fragmentation Charges against them.[1c][1d]