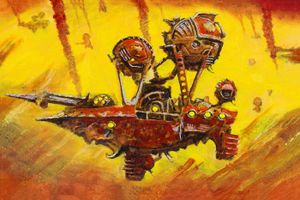 The design of the Frigate attempts to balance speed, transport capacity and firepower to create a versatile craft. Its sleek hull and powerful buoyancy endrin, gives it enough speed to escape a ravenous lumprey and enough power to pull clear from the gravitational drag of a density hole. Frigates also contain cargo holds but are much smaller than those of massive aetherhulks or cloud-dredgers used for mining but the Frigate makes it up with weapons and speed.[1a]

The Frigate's main gun is mounted atop the foredeck in a turret that can be fitted with either a sky cannon or a harpoon-like skyhook. In addition, it is equipped with bow-mounted ball turrets armed with aethershot swivelguns, a payload of grudgesettler bombs against tightly packed enemies on the ground and detonation drills that tear up the terrain in a chain of seismic blasts to stop the enemy's manoeuvres. They can also release Skymines to protect themselves from aerial enemies that skeet to come close.[1a]