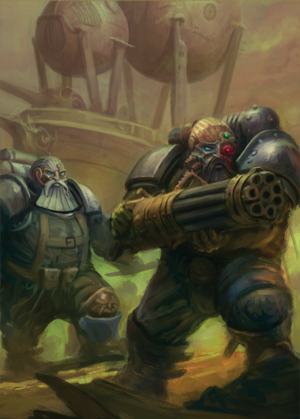 Arkanaut Companies are the main infantry forces of the Kharadron Overlords. They are hardened and toughened both by battle and the daily challenges of aeronautical life. They spend whole wind cycles at a time aboard their craft, crammed into tight quarters. Simply standing watch at high altitudes can push a Kharadron to become wind-bitten, even in their arkanaut armour, due to the strange metallic airs that drift far above the clouds of Chamon.[1a]

While the earliest Kharadron ships were crewed by clans, the system has changed since the establishment of a meritocracy. Even though becoming an Arkanaut carries its risks, many Kharadron are willing to take the risk to gain wealth. On the day of Brynruf, when the sun shines gold over Chamon, the different Arkanaut Academies of every sky-port hold a six-day competition where only the highest achievers are allowed into the Arkanaut Academies, the training facilities where they are taught military drills and aeronautical skills. On Musterpress days, Captains arrive to observe the drills so they may choose to recruit new crew members by purchasing contracts. Those selected to join the Arkanaut Companies must go through any number of rites and rituals sacred to their new fleet, ship or both. Each recruit can only participate in three Musterpresses and, if they are not chosen, they must instead settle for lesser positions such as in mining or fishing vessels or as dockworkers.[1a]

Arkanauts work long shifts scanning the horizon for foes or aether-gold. They must be ready for anything from packs of manticores to harkraken and even enemy fleets hailing from those of rogue sky-ports to airborne grots. When the battle is on the ground they descend swiftly via ships grav-ladders or suspension ropes to deploy rapidly into the fray.[1a]

Most Arkanauts are armed with pistols and cutting blades, allowing them to pepper the enemy with shots before engaging them at close quarters. A few carry heavier weaponry such as skypikes that adds to a company's close-combat prowess, an aethermatic volley gun that lays down a blisteringly high rate of fire or the portable version of the ship-mounted skyhook that is effective at bringing down large targets. Company Captains wield either an Aetherflare Pistol or a Volley Pistol.[1a]

The sky-suits of the Arkanaut Companies are made to allow the wielders to operate in high altitude and in the confines of toxic-metal clouds.[2a]