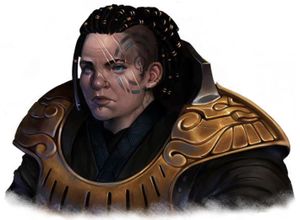 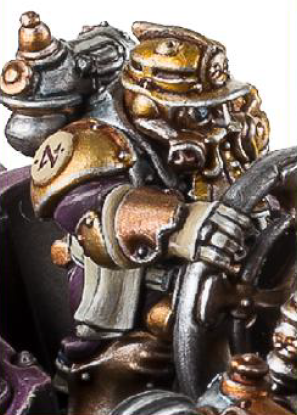 An Arkanaut Captain piloting a skyvessel.

Every kharadron skyvessel has an Arkanaut Captain, or Captain for short, acting has the airship's undisputed leader.[2a]

Arkanaut Captains are commissioned by the Admirals Council of their sky-port.[1b]

Kharadron skyvessels are akin to ancient duardin clans inasmuch as they are akin to a basic family unit for those working in the Sky-fleets.[3a] Within this structure, the airship's Captain embodies the head of that family.[3a]

In addition, in order to keep command an Arkanaut Captains must ensure that their expedition is lucrative, or else they risk facing a Code-approved mutiny.[3a]

While the rule of a Captain over their craft is absolute, they nonetheless answer to Arkanaut Admirals.[3a]

Furthermore, in accordance with Article 2, Point 2 of the Kharadron Code, Captains receive two shares of a galkhron.[1a]

Acting as a reflection of greater kharadron society, skyvessels are run as a meritocracy. As such, Arkanaut Captains receive their commission according to their ability to make their voyage as profitable as it can be.[3a]

If a Captain fails in their duties during a journey, and the shareholding crewmembers aren't confident that the situation might improve, then the crew may usurp a captaincy. Such mutinies are allowed by Artycle 1, Point 5 of the Kharadron Code.[2a]

In accordance with Artycle 1, Point 6 of the Kharadron Code, democratically deposed Arkanaut Captains are not dishonoured; they simply lose their rank and join the crew.[2a]