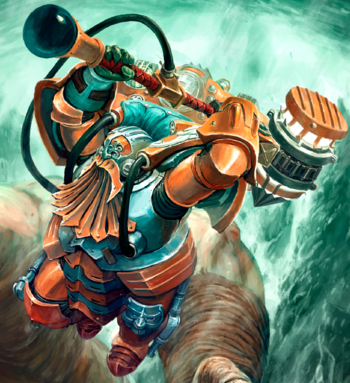 Arkanaut Admirals are veteran Arkanauts who have risen to take the leadership of the kharadron sky-fleets.[1a]

Admirals must work their way up through the ranks starting as neophyte Arkanauts. After reaching the position of Captain those that seek to become an Admiral must pass an exhaustive examination involving both theoretical and practical tests ending in a final hearing in front of the assembled Admirals Council of their home sky-port. Only after a majority vote from their superiors will they be promoted and, by this point, their knowledge of shipcraft, military theory and the Kharadron Code is encyclopaedic.[1a]

An Admiral does not have a ship of their own and each ship has its own Captain. Instead, they will nominate one craft as their flagship from which they will oversee tactical manoeuvres, direct concentrated firepower and coordinate land and air forces. While their main role is that of a commander, they do not lead from the rear and Admirals are heavily armed and armoured.[1a]

With their high share of profits, Admirals outfit themselves with thick plates of Arkanaut armour and back-mounted generators that fuel their aethermatically powered Skalfhammer, enabling it to impact with enough force to crack boulders. In addition, they carry a multi-barrelled volley pistol as a sidearm.[1a]