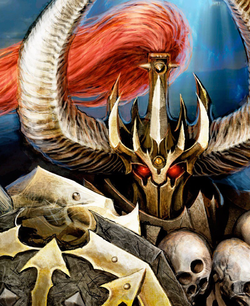 Archaon is the Everchosen of Chaos, the doom of all that unites the armies of the Dark Gods as the greatest of their champions, doing so with the legendary daemon sword, the Slayer of Kings and mounted upon the terrifying beast known as Dorghar. He will command the armies of Chaos to see that Sigmar's heroes fail and to unmake the Mortal Realms.[1]

Archaon invasion to the Mortal Realms was heralded by various signs:

As Archaon and his armies arrived on the Mortal Realms from the Realm of Chaos, Realmgates from the Ulgu to Hysh shuddered, felt even in Azyrheim as Sigmar was gathering his forces.[2c]

The conquest of the Allpoints was Archaon's key strategy in his plan to conquer the realms, so he attacked all of its gates simultaneously. Sigmar's armies managed to hold out, until the bridge to the Realm of Shyish, guarded by Nagash fell. After his victory he opened a gateway to the Realm of Chaos and renamed it the Eightpoints.[2c]

Archaon commanded his forces to cause further sedition in the Pantheon, working to break communications between the gods using a network of spies and agents. These gods tried to fight the Everchosen's armies, but their divisions, both in spirit and purpose, led to only to frustrations as Chaos took even more of their domains. The mortals of the realm were reduced to savage tribes and broken kingdoms, too weak to oppose the will of the Champion of Chaos. Still, Archaon ordered their complete annihilation.[2c]

In the Battle of the Burning Skies, Archaon faced Sigmar after he had just four greater daemons of each of the Dark Gods. Archaon's trickery robbed him of Ghal Maraz forcing Sigmar's armies to retreat.[2c]

Seeing the resistance of the Sun Kings of Atar through a golden orb that hand high above the Solar Bastion, Archaon ordered his wizards to weave a spell of winter across Atar. When the Bastion fell it's people were cowering in their frozen keeps.[2c]

The aerial kingdom of Zepheria fell to Archaon, leading an army of flying daemons and champions on winged steeds.[2c]

As many millions fled Archaon's armies into Azyrheim, it was discovered that the refuges were infected with a sorcerous contagions. Sigmar had to order many to turn away from his gate and many within his realm destroyed. When the Gates of Azyr close, Archaon was furious that he was denied his prize. He vented his wrath on the people that the God-King had abandoned.[2c]

The priests of Starholm tried to banish Archaon with a prayer, but instead the spell loosed U'zuhl from the Slayer of Kings, turning the place into embers before Archaon was able to recapture the daemon and sealed it within his blade.[2c]

Many champions swore to their gods that they would slay Archaon, they all failed their severed heads hung from his trophy racks. One of these was Athesia, Immortal Champion of the Silver Citadel, which he fed to Dorghar so he could forever remind her of the loss.[2c]

The duardin of Razharim sealed their gates against the Everchosen's armies and rather than siege them, he ruptured the city's lava dams drowning them in molten rock.[2c]

He ordered a conclave of Chaos Sorcerers and Gaunt Summoners to lure Iquala into a ambush. Not even a slann's arcane might could resist the incoming tempest.[2c]

In a century Archaon reduced the Lantic Empire from a technologically-advanced empire to a handful of primitive tribes, taking great satisfaction in this fall from power.[2c]

Archaon faced one of his few defeats in the Age of Chaos in the Umbral Deeps campaign. He decided to study the ruler of Ulgu, starting a clandestine war.[2c]

After the Splintershard War, Archaon built the Cage of Bones from the remain of Nagash's armies. Binding them in Chaos-forged tether, the legion of undead writhed uselessly at they tried to obey the commands of the Great Necromancer.[2c]

He sent Selpher Zaronax to keep the stranglehold of chaos over the Great Parch, an objective which he succeeds after the fall of the Agloraxi at the manifested fist of Khorne.[3a]

Sigmar's Tempest broke across the Mortal Realms sending the Stormcast Eternals as lighting bolts into battle. Archaon quickly sent armies after them so he could gauge their strength and although he lost many thousands, he still had endless hosts to call upon. Their arrival made many old gods rise to action, gathering armies to settle ancient scores. He mustered his Realm Lords - the generals of his armies - and planned for the destruction of the Stormcast.[2c]

He first faced these new foes on Mount Kronus, slaughtering the Hammers of Sigmar, hewing their finest apart with the Slayer of Kings. Realising Sigmar's plan to conquer the Realmgates he reinforced the Eightpoints and sabotaged many Realmgates with murder spells. The Primal Vortex, the Ironstar Gates and the Crystal Portals of Hysh were just a few of these place where Stormcast fell prey to these spells.[2c]

The Grand Tyrant and his World Stampede were cast into the Amber Gorge of Ghur by Archaon leading a army of monstrous abominations.[2c]

Below is a list of titles Archaon is known for: