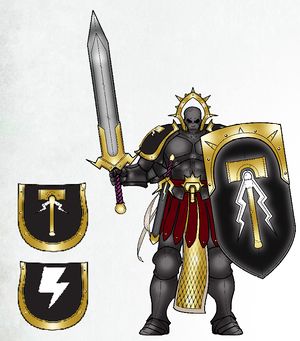 A Liberator of the Anvils of the Heldenhammer.

They are sinister of aspect and have a archaic mindset, using many practices and rites that were once long lost to mortal memory. What they fear the most is the prospect of their final demise, with many of their Lord-Relictors frequently brooding on the subject. They trust Sigmar to not loose the War of Spirits.[8]

The Anvils of The Heldenhammer are recruited from heroes of a distant age, long ancient dead that fight like spectres out of legend.[8] Unlike most Eternals, they were not taken on the brink of death but were already at rest when they were called by Sigmar, Nagash considers this an unfrogivable theft and some inhabitants of Shyish were equally enraged to disvoer that their ancient heroes had been taken from them during their time of need.[10a]

But instead of feeling resentment against being plunged into battle once more, the opposite is true for these warriors of Sigmar. Protected from [Nagash]'s clutches trough the miracle of Reforging, Death was no longer feared, but analyzed, studied, and in times, wielded as weapon by the Anvils of the Heldenhammer, protectors of the lives and souls of Sigmar's people.[17a]

The Black Nexus in Anvilgard

There are many cults and catacomb-lodges that are part of the culture of the Stormhost.[10a] Deep within their Stormkeeps catacomb-shrines are dedicated to preserving the memory of those anciet death gods devoured by the Great Necromancer Nagash.[17a] Foremost among them is the god Morrda, widely worshiped in the great city of Shyish, Lethis. Often leaders of the Anvils of the Heldenhammer serve as high priests to these cults.[17a] Many of the Eternals revere Morrda, a god of the dead that resisted Nagash and remained whole in the ancient past, to find a way to thwart Nagash, and end his drag on their souls.[17a] 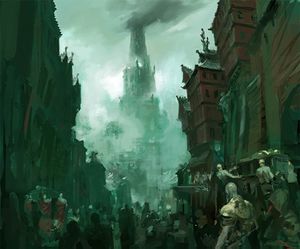 The Grand Mausoleum in Lethis

Located on the shores of Lake Lethis in the Underworld of Stygxx, Lethis is the greatest of the shyishian Free Cities. At its center stands the Stormkeep of the Anvils of the Heldenhammer. Built from black stone, the Grand Mausoleum looms foreboding over the city. Standing guard over great swathes of holy soil, and the remains of saints and martyrs, the fortress almost seems like a enormous mortuary shrine. Yet, it is just as important to Sigmar's campaign in the Realms as it protects the Realmgate known as the Veil.[18a]

The Black Nexus stands at the very heart of the city of Anvilgard. It towers over every other building in the city, it's dark walls are built from black volcanic rock that can be found along the Charrwind Coast. Gaining entry into the fortress is an almost impossible task, as only Stormcast Eternals are permitted to entry.[19a] For the Black Nexus is not only a fortress, but also a strategic hub of immense importance. Four different Realmgates are hidden inside the Black Nexus' walls. Allowing the Anvils of the Heldenhammer to swiftly relocated their forces across the Realms.[19b]

In battle, the Anvils of the Heldenhammer employ strategies, refined over the long centuries, their lines among the finest of all the Stormcast hosts, as their warriors fight with the experience of lifetimes full of conflict. Their close relationship allows them to remain calm even in the heat of the fiercest battles, as even their dead on the field of battle is only temporary.[17a]

The same is not true for most of their opponents, so the Anvils decorate their armors with skeletal artefacts or skull-faced helmets, wielding the fear of death as another weapon in their arsenal. Many an army has laid down their weapons at the sight of these warriors before even a single blow has been struck.[17a]

Yet, the most hated of their many foes are the undead constructs of the Ossiarch Bonereapers. Nagash's Necrotopia, the rule of the dead over the living, is seen as pervasion of everything Sigmar and the Stormcast Eternals believe in. Yet, the brutal clashes between these two are fought in unnerving silence. Save for the occasional command and blast of azyrite energy as Sigmarite clashes against bone.[17a]

The more they are reforged the more skeletal and dead they appear. Sunken eyes, grey, corpse-like skin are common side-effects documented among the Anvils of the Heldenhammer. Some Stormcast have also witnessed their booming voices drop trough a faint whisper.[17a] 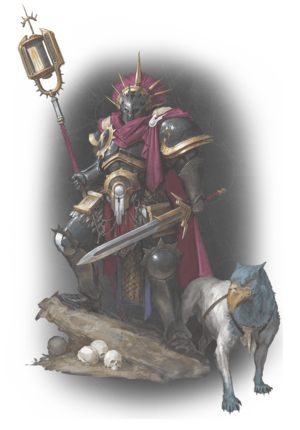