From Age of Sigmar - Lexicanum
(Redirected from Anvil of Apotheosis)
Jump to: navigation, search 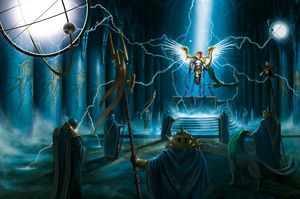 The Anvil of Apotheosis.

Sigmarabulum, the World-Ring, is an immense orbital ring built around Mallus, the remains of the World-That-Was, found high above the palace city of Sigmaron. It is within the soul-mills, forges and laboratories of the World-Ring that each and every Stormcast Eternal is reforged.[1a][4][5a] Though Grungni labored longest and hardest on the ring, it's creation was made possible due to the efforts of many of the gods of the Pantheon of Order including Dracothion and Tyrion.[3a]

There are only a few routes between it and the palace-city of Sigmaron, with the swiftest aether-craft taking days to reach it. It is located to the south of the Sigendil.[1a]

The Tower of Apogee

It is surmounted by The Chamber of the Broken World on the edge of the ring’s inner curve, facing the remnant of world-that-was. It was said to have been the first part of the entire structure to be constructed from which the rest of the ring had grown. Around it are smaller towers, connected by hundreds of walkways and lightning constantly flows about the great pylons that crown each of them. These are the soul-mills - the storehouses of the dead souls containing those fallen Stormcast Eternals who cannot be immediately reforged – whether due to the sheer number of deaths or some more esoteric reason.[1b]

The Tower has many semi-enclosed archways, which are defended by heavy artillery pieces such as celestar ballistae. These stand ready to repel anyone foolish enough to attack the tower, or blast through the scaly hides of the star-born monstrosities that occasionally slunk down from the outer dark.[1b]

An immense pair of double doors guards entry to the chamber itself, covered in celestial carvings beyond the skill of mortal hands are guarded by a pair of clockwork gargants. They are constructed from gold and brass and are fashioned after two of the ancient lords of that race, Mog and Gamog, who had served for centuries as Sigmar’s shield-bearers in penance for their earlier defiance. Their own death-masks adorn two great automatons. The honour of guarding the chamber is much vied for among the Stormcast with only the greatest warriors of the Paladin Conclaves, as determined by the Trials of Culmination, were allowed to stand sentry here and then only for twelve days and nights.[1b]

Chamber of the Broken World

The Chamber of the Broken World is a vast, roofed by a dome of dark glass, wrought from the sands of the Caelum Desert. The chamber is divided into three Tiers of Trial with each on gargantuan clockwork platforms that ensure they are perpetually moving slowly around the central core.[1b]

Once a soul passes through the Tower of Apogee they enter the chamber and must pass through each tier to be reforged into a Stormcast Eternal. Every reforging is an excruciatingly painful process, and many Stormcast are traumatised by their experiences within the tiers. A soul that can not survive the rigours of reforging simply dissipates and dissolves into the firmament of the Realm of Heavens.[5a]

Here the fires of creation are kept stoked by the celestial automata of the Six Smiths.[1b] Within this forge souls are reduced to soul-stuff, so that impurities and weakness can be sifted out of them.[5a]

The Cairns of Tempering are seven great stones plucked from the volcanic surface of Mallus by Grungni himself. [1b] As a soul passes through the Cairns, they must pass seven tests devised by the Smith-God himself.[5a]

An ensorcelled altar of pure sigmarite, torn from the core of Mallus by Sigmar himself. It smoulders with the heat of that world’s dying, and sits atop a dais fashioned in the shape of the High Star.[1b] The Anvil contains within it the workshops and smithies of the Six Smiths. Once a soul enters this area of the Chamber of the Broken World, they are reshaped by the artifice of the Six Smiths and fury of lightning, eventually gaining new material form as a Stormcast Eternal.[5a]

Many of the factories and workshops within the Anvil of Apotheosis are dedicated to the creation of the weapons and armor used by the Stormhosts. These weapons are made by drawing on the energies of the Living Tempests of Azyr during the forging processes.[6b]

The legendary and mysterious Six Smiths can be found within the Sigmarabulum.[6b]

Tauralons have made their nests all across the Sigmarabulum ever since it's creation. These creatures feed on the void-shoals, which feed on magic, found in the Aetheric Void. They enjoy headbutting meteorites as a form of game.[6c]

At the start of the Realmgate Wars the ring of the Sigmarabulum blazed continually with the energies of Reforging.[2]