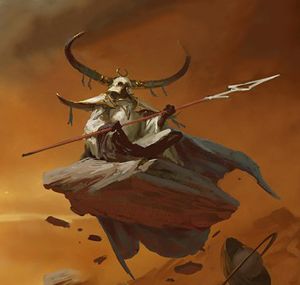 Alarith Stonemages are the wizards of the Lumineth Realm-lords. Having endured the hardest trials the mountains of Hysh, the Stonemages now live in perfect harmony with themselves and their Aelementor patron. A Stonemage is as much as an artisan, creating beautiful pieces from the living stone, as are they warriors, becoming as hard as granite and channeling the powers of Hysh itself.[1]

During the Age of Chaos many mountains were splintered or crumbled turning once peaceful peaks into malevolent and bitter spirits. To travelers in valleys were buried under landslides, climbers were shucked off and broken upon cruel rocks and even standing in their shadow resulted in freezing to death. When Teclis returned from his sojourn to begin the Reinvention did the first Alarith mages approach the mountains in supplication. They endured or avoided hailstorms of sharp rocks, crashing boulders, deadly mudslides and avalanches of glittering minerals and many died but those that managed to reach the upper peaks sang laments and songs of supplication to the mountains, asking for their forgiveness. They made respectful works of art out of interlocking stones and adorned the shoulders of the broken peaks with beautiful decoration while fasting under the light of Hysh and its moons. Many died as their bodies wasted away but the Alarith mages had proven their desire for atonement to be sincere. Algae and moss grew around them where they sat and creatures crept from the cracks in the rock to bare their throats. The Alarith sparingly ate of these gifts as their relationship with the mountain was tenuous. [1]

Over time, the relationship became stronger allowing a spiritual bond between aelf and mountain that evolved into a full symbiosis. With the mountain's blessing, the Alarith mages became more stoic and enduring than any breed of aelf.[1]

In battle, Alarith Stonemages use their bond with their geomantic patrons to embody the strength and solidity of the mountain allowing them to control rocks, boulders and even gravity itself. Instead of becoming incorporeal like those of the zenith temples, they can become hard as granite for a time while still breathing and also grant this ability to the Alarith Stoneguard around them and draw power from the symbiosis between mage and warrior alike. They can also entomb the enemy in solid rock or channel Hysh's power into the Spirits of the Mountain.[1][2] Their connection with the mountain spirits of Hysh grants them access to a special kind of magic, often referred to as the Lore of the High Peaks.[3a]

They are armed with a Staff of the High Peaks, and clad in Stonescale armor. Some Stonemage carry small pieces of their Aelementor with them, to remind them of their connection with their patron, no matter where they are.[1][3a]

Sometimes, an Alarith joins a Binding to become a Soulbound, these Aelementari have to balance their loyality to their patron Aelementor, and to those souls they are bound to. Stonemages have a especially close relation with their mountainous patron, so they are able to stay in contact with them, even when Realms away from each other. Because of this, they often act as ambassadors, not just to their immediate Binding, but to the Realms themselves. Starting communication and cooperation between the mountains of Hysh, the massifs of Ghur and the firey peaks of Aqshy[3a].