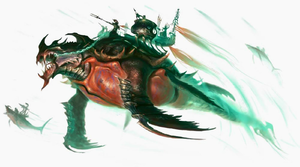 Akhelian Leviadon is the name applied to a military unit of the Idoneth Enclaves comprised of one of the hulking sea monsters known as Leviadons and a crew of Idoneth. These massive beasts are covered in tough scales and a nearly impenetrable shell.[1a][2a][3]

The crew that operates on the back of an Akhelian Leviadon is led by a high-ranking Akhelian known as a Ma'harr, or the Master of the Reins. Supporting the Ma'harr are two Akhelian who operate the harpoon launchers on the beast's back. In addition to the other crew, a Namarti drummer who bangs on an enchanted drum. This creates ripples of that refract the light around the bond-beast, making it difficult for artillery and missile troops to precisely target the beast.[1a][2a][3]

Akhelian Leviadons are most often used within the standard Akhelian Battalions of the Idoneth Phalanxes, where they serve alongside Fangmora riding Akhelian Guard and Akhelian Allopexes, serving as indomitable anchoring points for the Idoneth army. They can be used as either mobile weapons platforms or living battering rams. They are occasionally grouped into siege battalions, comprised entirely of Akhelian Leviadons.[1b][3]

The Leviadon naturally comes equipped with powerful jaws, strong enough to crush steel and almost impossible to pry open once they clamp down. Its foremost fins have been outfitted with segmented, scythed-blades, while the other fins and tails have been fitted with piercing spurs.[1a][2a][3]

In addition a massive howdah is affixed upon the shell of the Leviadon, within it are two Razorshell harpoon launchers, which are operated by novice Akhellians[1c], and a Namarti Void Drummer who beats on an enchanted void drum adding sorcerous defenses, by distorting the light around it and nearby allies, to the beast's already impressive natural ones.[1a][2a][3]

The Ma'harr, Master of Reins, pilots the bond-beast through the blinders and chains that keep it enslaved. He carries a Twinpronged spear, that can be used on anyone that draws too close.[2a][3]