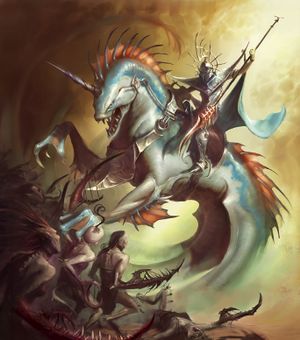 Akhelian Kings and Akhelian Queens - whether directing a raid for souls along the coastline or defending an underwater stronghold - are considered to be the mightiest warriors amongst the Idoneth. To be given command of a Phalanx, one must prove themselves, being swift and strong as well as sharp-minded. [1a][1b][2a][3]

All Akhelians are required to serve within the military of the Enclave of their birth and as such are trained within the Asydrazor from an early age. Trainees must complete their mhair trials before they are declared full Akhelians.[1b]

These young warriors will then either be grouped with their training group and made into a new unit, or they will be drafted into existing units to replace those lost during raids. From here on out their fate is in their own hands, as every rank within the military must be earned with time, skill, and experience. Only through an impressive degree of military talent, decades of experience, and a keen tactical mind can a warrior rise up through the ranks of the Battalions.[1a][1b][3]

Achieving the rank of King or Queen and gaining the right to command a Phalanx is a long, harrowing journey for Akhelians. After completing their training in the Asydrazor they must spend decades proving their skills and sharpening their tactical and logistical thinking, achieving each rank within the hierarchies of the military through their own skill and merit until they can prove themselves worthy of command. [1a][1b][2a]

Every Phalanx of the Idoneth Enclaves is led by a Royal Council. These triumvirates are comprised of an Akhelian King or Queen, an Isharann Tidecaster, and an Isharann Soulscryer. It is their duty to direct the phalanx they lead to defend their enclaves and raid the surface for souls, carefully ensuring that the losses received never outweigh the gains.[1b][1c]

These leaders are shinning examples of their caste, a paragon that is to be emulated in battle by other Akhelians. They are more than just a inspiring presence, they are also peerless blade masters, able to beat their comrades in single combat and have a mind just as deft as his sword skills, able to know when exactly to press any advantage or rally their warriors when it is lost. All these traits are crucial for they must make decisions without hesitation and be willing to fight from the front or lead the Idoneth charge.[2a][3]

If the Ethersea tide is high they can command their warrior to attack with unrelenting fury.[2a][3]

The most notable part of a King or Queen's arsenal is their Deepmare mount, massive, scaled beasts with a sungle piercing horn so rare that they are reserved for the greatest of warriors only. These vicious sea beasts assail prey with their spiral horns, fangs, talons, and tails.[1a][1b][2a][3]

The King or Queen will employ a wide variety of weaponry that includes Bladed Polearms, also called rhomphaias, and Greatswords, which are used in tandem with a King's Shield. They can however shoulder this shield and use a light Falchion in their place.[1a][1d][2a][3]

The monarchs wear splendid heavy plate armour with leg and shoulder coverings, the shoulder which extend father than their shoulders and support for the enormous and wide cloak with Idoneth symbols on its edges. Their close-face helms can have different crests like a transverse sail and parallel sail and a fish net.[3]