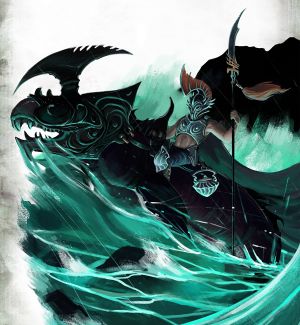 Akhelian Emmissaries are the diplomats and ambassadors of the Idoneth Deepkin, their duty is to liaise with and foster relationships with the Free Cities of Sigmar. These Emissaries are pulled from the ranks of the Akhelian, the warrior caste of the the Idoneth Enclaves who are trained in the academies known as Asydrazors.[2a]

For many long millenia the Enclaves of the Idoneth Deepkin chose to live in isolation, exempting those few times they left their hidden cities to raid the surface, seeking safety in the depths of the Realms' oceans. But the threats brought on by the Necroquake and the stirrings of Slaanesh have forced the Idoneth to seek a new skill to ensure survival, diplomacy. So Emissaries are chosen from among the ranks of the Akhelian and sent to act as the voice of their Enclaves in Sigmar's Free Cities. Many Enclaves send only those among their number who are troublemakers or nuisances, but others, particularly those most effected by the horrors of the ages, take the role of Emissary with deadly seriousness and choose only those best suited to represent the virtues of their people.[2a]

Despite the isolation preferred by their race, Akhelian Emissaries are often found among the ranks of the Soulbound. This is, in a bit of irony, because the role of Emissary isolates them from their Enclave's chorrileum, meaning there is no guarantee their soul will escape Slaanesh should they fall carrying out their duties. But becoming Soulbound assures that their soul can not be claimed by Slaanesh, who ever hungers for aelven souls.[2a]

Those Akhelian chosen to serve as Emissaries are not merely rank and file soldiers, they are paragons of leadership and war, who ride upon Fangmora Eels and wear Ethersea Cloaks that allow their mounts to survive upon land without the aid of Isharann, a chestplate, a Voltspear or a Helsabre, and a necklace with a seashell shard from their home.[2a]