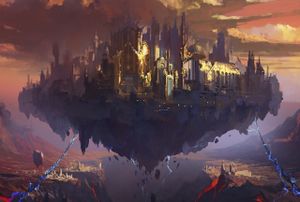 Capital of the Agloraxi Empire

Ahramentia was the capital city of the Agloraxi Empire in the Great Parch of the Realm of Aqshy. [1]

It was a great city of sorcerous design that was raised to drift in the sky, contained libraries with ancient texts, galleries of ancient relics and other marvels. It was inhabited by the mage elite of the Agloraxi, the Arch-Domini. [1][2a]

With the powers of their machines and wonders, like the Colossi or the Prismatikon, the Agloraxi subjugated large areas of the Great Parch, forcing the many kings and warlords of the lands to come to Ahramentia to pay their tribute before the Arch-Domini.[2a] While they constructed many wonders across the Great Parch, the Agloraxi grow bored with the world below them, slowly retreating back to their city to focus on their study of more and more esoteric works. Allowing other powers to rise, like the lands of Aspiria and Bataar in the west, and ultimately even stopped demanding tributes.[2a]

During the Age of Chaos, the Agloraxi used their powerful weapons against the hordes of the Blood God. Khorne sent an army of Daemons against them, but the Agloraxi used the fire of the Prismatikon to destroy the entire horde without a single drop of blood being spilt. [2a] Some claim, Khorne himself struck the city from the skies as punishment. Now that remains of Ahramentia are its ruins, spread all across the norther Flamescar Plateau.[1]