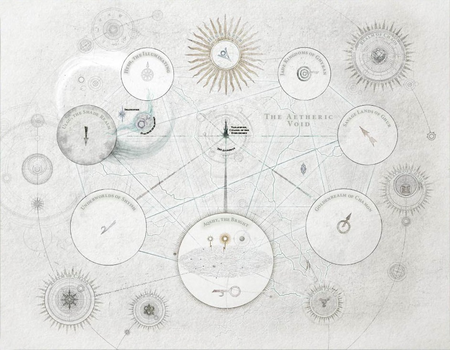 The Aetheric Void represents the emptiness between the spheres 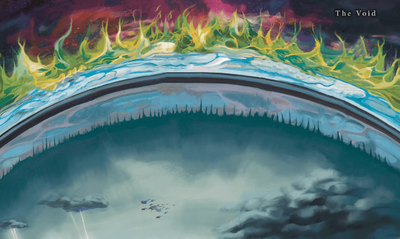 The Perimeter Inimical of Golgeth, where Realmsphere meet the Aetheric Void.

The Aetheric Void, also known as the Great Nothing, is a huge expanse of void made of loose unaligned magic, where the Realmspheres containing the Realms can be found. This component of the Cosmos Arcane can be safely traversed through the Realmgates that connect the Realms.[1]

Within this empty spaces between realms exists vast, ravenous entities more primordial than the Chaos Gods, predating thought itself. Whereas the Dark Gods are similar, they are like infants compared to these immense beings. These eldritch beings swim in the seas of eternity seeking anything they might devour.[2a] One such being was cast down to the Realm of Shyish, this dead god's final resting place becoming known as the Oasis of Souls, the source of shadeglass and the site upon which Shadespire is told to have been founded.[2b]

Another such creature of the void can be found sealed within a Stormvault, having been personally sealed by Sigmar during the Age of Myth. Lashing out with midnight black coils, the creature was surrounded by armoured gargants with shields of pure celestium. When it managed to grasp one gargant, its body was drained away into the absolute nothingness from which the creature was formed. However, the creature was laid low when Sigmar struck it in its center with Ghal Maraz, whereafter it was sealed away with the power of six Penumbral Engines.[4]

The great Ziggurat Ships of the Seraphon may also be found traversing the aetheric void. Following the destruction of the world-that-was, the Seraphon escaped into the Great Nothing for ages until the great godbeast Dracothion revived the Seraphon starships and guided them to the Realm of Azyr.[3a]