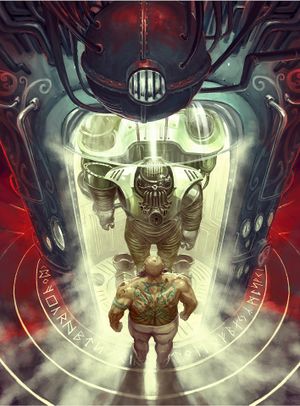 Aether-rigs are flight suits that operate as mobile power sources, allowing other the aethermatically powered kharadron devices to be used in the field. The aether-rigs consist of layers of padding for comfort and protection, and are equipped with harnesses, clips, cables, and sockets that can be modified to work with any aetheric device.[1a]

Aether-rigs have a number of Aether-gold Ingots which serve as the power source of kharadron equipment. The rig and ingots are able to conserve energy when it is not required and even harvest microscopic amounts of aether-gold from the air if present.[1a]