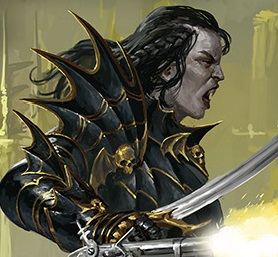 Image of Adhema from the cover of Spear of Shadows

She is tall and lithe with a narrow face, aristocratic and hard. Normally she travels clad in black armour of a curious design, its ridged plates covered in baroque adornment with a tall helm topped by a black crest of hair. Her laugh is noted as not being pleasant, having been likened to the scream of an excited cat.[1]

A daughter of the land of Szandor (the Proud and Cruel). The Mortarch of Blood had wielded the might of Szandor to protect her other domains in the Realm of Shyish until at last the blade broke, and she cast it into her opponent’s face, to make her escape. In her flight Neferata took the firstborn daughters of the great families with her, the orphans of a thousand murdered kingdoms, united in their hatred of the Ruinous Powers. The Blood Dragon himself, said to be the finest warrior Shyish had ever seen schooled her and the others in the arts of war. [1]

During the Age of Chaos she led a force of her sisters and accompanied Neferata to the far north of Shyish to aid the Rictus Clans in their fight against the Rotbringers led by the Order of the Fly.[2]

She has recently been seeking the Eight Lamentations having temporarily allied herself with several agents of Grungni who are doing the same.[1]

She is linked to Neferata by her blood and is able to communicate directly with her wherever she travels in the Mortal Realms, unless magical or other powerful forces interfered. As an ancient vampire she is extremely strong and fast as well as being able to heal quickly from wounds. She is able to command Terrorgheists and Steeds of Nulahmia to carry her where her mistress requires.[1]

Adhema is a direct and forthright warrior who talents are preeminent in her force of arms, determination and resilience rather than the stealth and subtly that Neferata's sisterhood are renowned for. Even as a mortal, she had not enjoyed reading, considering that if knowledge could not be held in the head, what good was it. However Neferata insisted that all her handmaidens learn to read, and do so widely and often.[1]

Honour had been major part of the lives of the aristocracy of Szandor, the highborn would, male and female alike, match blades at dawn, in snowy fields and Adhema still retains a sense of honour, although much of it is pledged to her sisters rather than any mortals she might encounter. She does not apologise for her arrogance that was part of her mortal upbringing and has not diminished since she became an immortal.[1]