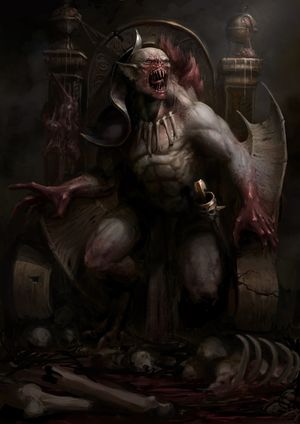 Abhorrant Archregents are ancient and evolved (or devolved) Abhorrant Ghoul Kings, their skin having thickened and its body developing iron-hard muscles even as its own madness grows ever more deeper and more invasive to any who come into contact with it. Even those who engage in battle with the vampire or his court can become affected, catching glimpses of the madness that drives their foes. Whole nations and Empires can succumb to the insanity and an Archregent will normally have an array of Ghoul Kings that serve them. [1c]

A few Archregents claim that they were part of the First Court of the Carrion King and some of the flesh-eaters consider them to be instruments of that long lost figure. [1c]

While each Flesh Eater Court led by a Ghoul King is similar to a kingdom Abhorrant Archregents rule over vast empires made up of many separate courts, collecting flesh-tithes from the Ghoul Kings beneath them and delivering insane proclamations in the name of the Carrion King. Some allow Ghoul Kings to act autonomously as long as they provide the Archregent with worthy gifts while others directly oversee matters within their empires and keep a tight leash on their Ghoul Kings.[1a]

Unlike Ghoul Kings who are ferocious hunters that lead their armies from the fore, Archregents tend to become brooding and reclusive and usually prefers to prowls its innermost sanctums letting petty Ghoul Kings to maintain the flesh harvests and and bloody feasts in the Archregent’s honour. But when a truly mighty threat to the kingdom arises the Archregent would enter the battlefield tearing through enemy ranks and leading its subjects to slaughter the enemy.[1c]