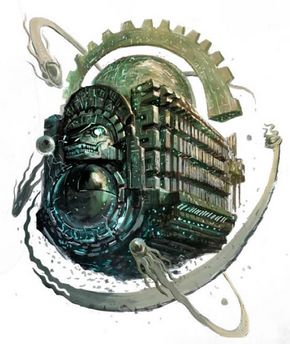 Few compare to the Moon Monks of Hysh in their contemplations and understandings of the cosmos. In their studies and mediations they had inadvertently come to possess much of the accumulated lore on the Seraphon, and through they they have surmised that the Seraphon and their temple ships must originate from outside the Mortal Realms - or perhaps even predate them. Indeed, the Seraphon were in fact survivors from the world-that-was, and during its destruction the temple-vessels were forced to launch a great exodus into the heavens as the world fell. Thus, the temple-ships are one of the last surviving relics of the world-that-was.[1b]

Even as the temple-ships were rejuvenated under the light of the stars, the cold-blooded nature of the Seraphon began to tell within the lightless void In an effort to save at least a measure of their servants, the slann magically compelled the majority into a state of suspended animation; with their temple-ships gradually losing power around them, their arcane energies unable to be replensihed within the aetheric void. It was the godbeast Dracothion that discovered the ice-wreathed ships floating through the Great Nothing. It was he who breathed the light of the stars over them and brought their occupants to wakefulness. Some skink scholars believe that Dracothion re-energised the ziggurat-vesserls and gave them the ability to independently transverse the void, as well as inudated the long-dormant spawning pools with the magic of the heavens.[1a]

The cosmic vessels of the Seraphon are a distant cry from the ocean-plying ships of the other races. The temple-fleets are more akin to entire floating cities cast into the heavens, replete with all manner of strange and arcane technologies. Beneath the stately pyramids and mystic obelisks are great star engines and world-morphine instruments, charged with magical force to be employed at the behest of the slann. The geometries of these fortress-ships is beyond mortal comprehension, though the ordered and rational minds of the Seraphon are well-adapted to navigating their confines. Within each ziggurat-ship, the scientific mixes with the arcane and the primitive in a near-seamless fashion.[1a]

Stellariums and orreries dominate entire chambers, through which seers of the Seraphon observe the tapestry of the heavens and divine the paths of the future. Glyph-covered walls are replete with snaking circuitry. Starlit sigils of warding mark the entrance to vast hatcheries, where rank upon rank of eggs are incubated, attended to by coteries of fretful skink handlers. These eggs contain the next generation of reptilian monsters bred by the Seraphon[1c], including the long-dormant Draconith.[2a]

Ziggurat-ships typically hover within the upper reaches of Azyr, or transverse the darkness of the aetheric void. When the warriors within attack, miniaturised Realmgates are opened via the technology of the Old Ones to send the Seraphon directly into the realms beyond. The blinding light of these teleportation beams is often misenterpreted as being a projected directly from the stars, and contributes to the oft-held belief that the Starborne Seraphon are entirely manifestations of Azyr.[2a]