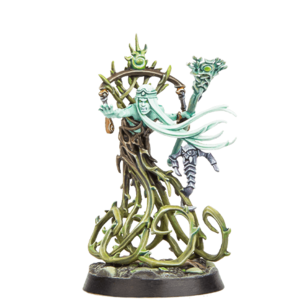 She was grown from an ancient soulpod in the Realm of Death and was once a diplomat and an emissary. She and her fellow Guardians have recently awakened by the Necroquake and are evergreen with vengeance for the kin that have been slain, drawing upon the centuries of martial memories and experiences of her predecessors to get her revenge and secure the lost soulpods. She channels the rampant life magics to rids dead places of those that serve Nagash.[2][3][1]

She is armed with a Briar Staff and attacks her foes with spiteful thorns. She is accompanied by a Spite that attacks their foes with their mandibles. As a wizard she is able to cast the more common spells and unbind as well as cast The Reaping spell.[2]