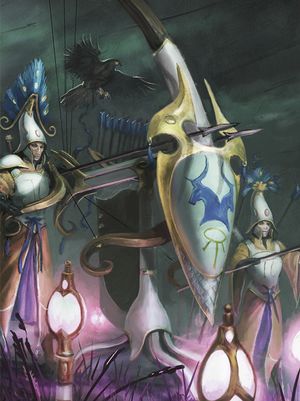 The Vanari Starshard Ballista is an artillery piece utilised by the Lumineth Realm-lords. It is similar in design to an upscaled version of the many-stringed compound bows utilised by the Vanari Auralan Sentinels, mounted on an elegant tripod allowing it to swivel. [1a]

The Lumineth pride speed and accuracy over anything else, and the design of the Starshard Ballista reflects this; they are crafted from supple, yet strong, wood from the Hyshian dreamwood. In addition, the crew that operate the Ballista are selected from the Vanari Auralan Sentinels with the keenest of eyesight and steadiest of hands. [1a]

Its ammunition is long-shafted bolts, of which it launches a pair of across the battlefield. Impact with the enemy is not where their use ends however - each bolt contains a reservoir of aetherquartz-infused water behind its tip, which emits a sudden and blinding light when halted. This same concept is utilised in aetherquartz lanterns that are planted in the ground around the ballista – should an enemy approach too close, they blaze with dazzling light to rob the impact of the charge and allow the Vanari to evade direct combat before reinforcements arrive. [1a]