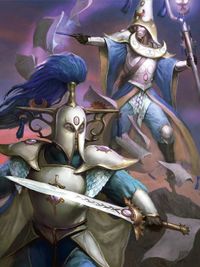 The technique of the Calligraves was pioneered by Il'yentai the Ancient, the pre-eminent scribe of Syar. The technique began as a means by which spells can be bound to parchment for later release. It later became a method by which runes could be magnified in both power and scale, etched on a nearby field via the transference magic of the Syari tradition. The Calligraves, held aloft by stilt-like 'dathar' shoes so they could escape its solidity, concentrated their art purely upon the realms themselves. Often they would use their talents to quiesce earthquakes and becalm landsligdes.[3]

It later became through necessity that this skill came to be used as a weapon. When the forces of Chaos sought to despoil and corrupt, the Calligraves would be deployed to restore sanctity with their magics burning the flesh of the unhallowed even as it purified the land of the taint of Chaos. Only later did they discover that by painting with liquid light-magic, siphoned from their aetherquartz lanterns, they could diminish enemy sorceries by painting runes of nullification, paint wounds onto their foes, or even erase enemies from existence with the ease an artist might thumb away an errant stroke of charcoal.[3]

Calligraves utilize a form of rune magic by painting runes of aetherquartz. The reality-altering magic of these runes can erase an enemy from existence entirely and the geomantic transference that passes from their pages to the land beneath them create powerful ripples in the earth to help allies and hinder foes.[1][2]