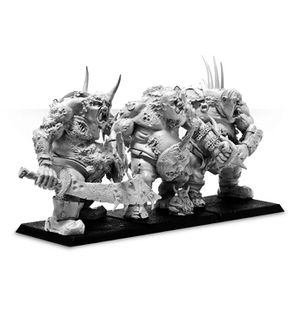 Plague Ogors are Ogors that can be found in the Tamurkhan's Horde. They are not willing servants of Nurgle, but are actually cursed creatures and sometimes their damned flesh will continue to fight for their foul patron after death.[1]

Their natural resilience is enhanced by the pox-ridden mutations and favours of Nurgle. Their flesh is covered in sores that drip with a poisonous ooze, making their touch capable of spreading deadly diseases that can kill in minutes. Their guts are infested with daemonic parasites that leave these Ogors famished and unable to satisfy their hunger, which makes them extremely dangerous after their charges which end in acts of extreme gluttony.[1]

They shamble into combat wielding Corroded Weapons, battering their enemies as they spread the filthy gifts of their god.[1]