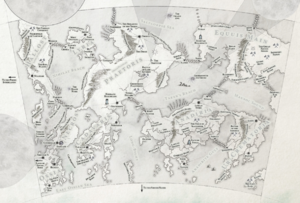 A map of the Ossiarch Empire.

The Ossiarch Empire is a region of the Realm of Shyish and group of underworlds dominated by the Ossiarch Bonereapers. It is found close to the Shyish Nadir and to the east of the Prime Innerlands. These are the origin point of the Ossiarchs' extensive invasions, launched via a network of fortified Realmgates both on dry land and at sea.[1]

The Ossiarch Bonereapers, having first been sculpted into being on the border of Ossia and Necros, have meticulously expanded their empire around the perimeter of the Shyish Nadir. They do this not only to protect the heartlands of Nagash, but also to draw directly upon the pulsing deathly energies of the Nadir itself.[1]

When the Bonereapers march forth to war, they do so along pathways that exploit undercurrents of magical energy divined by the Mortisans or the Great Necromancer himself. These routes are dictated more by hidden ley lines, the locations of Realmgates and the celestial configurations of the Mortal Realms than the quotidian elements of physical landscapes. They will often cross mountain ranges, sail over seas of boiling tar and fight across monster-haunted wastelands as the crow flies instead of taking safer but more circuitous routes along conventional roads. Seen from the heavens, the lines of conquest these routes trace, and the necropolises the Ossiarchs establish on the way, form a geometric lattice that owes far more to Nagash’s implacable will than to the practicalities which govern the movements of other, less resilient armies.[1]