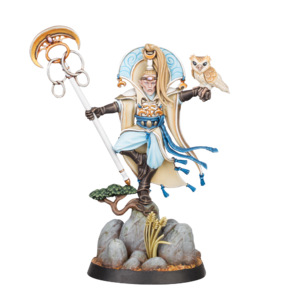 He, his familiar Ulari and his Purifiers ventured in a quest to quiesce the living mountain of Beastgrave and to stop the spread of th Katophrane curse to the rest of Mortal Realms.[1a][1b]

He is a spellcaster steeped in arcane skill, able to wield the magic of Hysh to dazzle and sear foes. He can cast the Arcane Bolt, Mystic Shield and Dazzling Light spells.[1a]

He is accompanied by a Scryowl Familiar called Ulari. Nothing escapes its gaze as it soars above the battlefield and helps him with casting spells and targeting enemies out of sight.[1a]

He wields a Staff of Enlightenment into battle that he can use at close range and can defend himself with searing beams at a range.[1a]