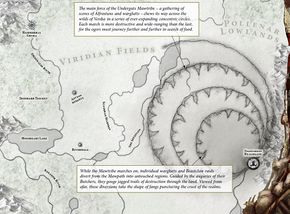 A Mawpath is a migratory route of a Mawtribe guided by the magic of the Butchers who can read the eternal hunger of Gorkamorka and find the direction of the greatest quantities of fresh meat.[1b]

During the Age of Myth, the ogors fought in Gorkamorka's armies, who fought at the behest of the God-King Sigmar. While the ogors were able to glut themselves on ferocious monsters and abominations that threatened Sigmar's growing empire they eventually came to resent the fact that they could not stuff themselves with the flesh of Sigmar's people. This denial of the ogors' appetite only increased their cravings, and so when Gorkamorka tired of doing the God-King's bidding and embarked upon a rampage across the Mortal Realms the ogors eagerly followed their frenzied deity. The carved great furrows through the realms as they indulged their gluttony to the full. These migratory paths would come to be known as Mawpaths.[1b]

Mawpaths are usually a circular journey consisting of leaving their lair and chewing a great bite out of the realm before returning to their homeland for a gluttonous feast and traveling further and further with each successive raid in order to find new sources of food. At the end of its migratory conquests, a Mawtribe returns to its ancient Glutthold with vast hauls of flesh and gore which is poured into immense bubbling cauldrons and ogors feast, fight and give praise to the Gulping God in a great celebration of virility that births the next generation of ogors. The sheer power of the feast allows the Mawtribe’s Butchers to channel the power to tear open the feasting pits, creating a magical portal from the piles of coagulated gore. Thus the Mawtribe embarks upon a fresh Mawpath through the portals towards fresh feeding grounds.[1b]