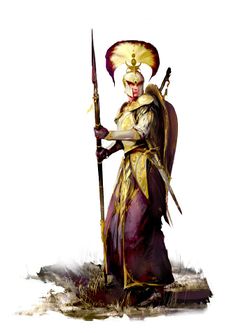 An Auralan Warden from Syar

Great Nation of Syar is one of the Ten Paradises of the Realm of Hysh.[1] It is located on the northern part of the Teclian hemisphere, neighbouring Oultrai, Iliatha and Xintil.[2b] The Syari are one of the so called Teclian nations who primarily base their culture on the teachings of Teclis.[1] They are adept at manipulating the energy of Hysh. [2b]

The capital of their domain is the city of Ar-Ennascath, where a yearly competition of craftmanship is held.

The Syari gained fame among the Lumineth Great Nations for the skill of their artisans, producing some of the most powerful magical masterpieces as well as incredible works of art.[2a]

During the events of the Ocari Dara, the "Spirefall", Syar was ravaged when creations were turned on one another. In this time, sentient chasms swallowed entire cities and reality-warping spells were unleashed. Some of the survivors swore never to create weapons again, but were later convinced by Teclis to do so; arguing it was better to have broken an oath than to be complicit in the dominion of Chaos.[4a]

Syar is still surrounded by wastes, among which prowl dangers from the time of the Ocari Dara, such as the sentient chasms and predatory time-warping spells.[2e] The culture of Syar has, after their humbling, searched for balance over than unrestrained creation. Their culture is somewhat understated, disguising potent artefacts as innocuous symbols of office, and citizens of Syar have become keenly aware of how others perceive them. Nonetheless, they use the trappings of arrogance to better bait enemies.[4a]

Seeing the threat of Slaanesh breaking free and ascending into her full power again, Teclis musters the armies of Syar, Iliatha, Zaitrec and Ymetrica for the conflict to come. He personally leads the Ymetrican forces as a vanguard into the other mortal realms, bolstering their defences against the chaos gods.[2c]