Difference between revisions of "Freeguild Outrider" 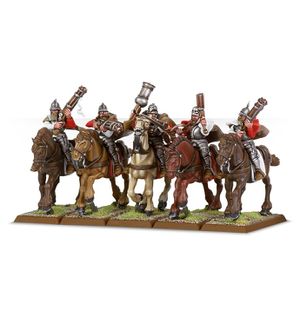 The Freeguild Outriders are light cavalry soldiers of the Free Peoples, the Freeguild and the Cities of Sigmar. They are master equestrians mounted on Steeds, and expert gunmen equipped with a variety of blackpowder weapons.[1a][5]

Consisting of more older and seasoned veterans compared to Freeguild Pistoliers that harry and harass the enemy flanks during battles and also act as scouts. They blast away their foes with pinpoint precision and then escape to avoid retribution. They patrol the outer districts of the cities, and when they find a threat they use their steeds and firearms to escape to summon aid.[1a][4][5]

They are led by Sharpshooters and supported by Trumpeters.[5]

They are armed with a Repeater Handguns and Freeguild Cavalry Sabres whilst the Sharpshooter who leads them can wield a variety of weapons including a brace of pistols or a Grenade-launching Blunderbuss.[1b][5]