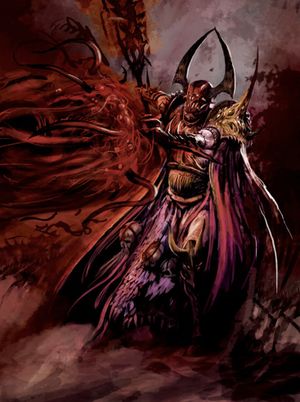 Chaos Sorcerer Lords are the oracles and seers of the Slaves to Darkness. Due to their close connection to the Dark Gods, they often hold high positions within a tribe, as it is they who can best divine their true intentions. A commonly held superstition is that killing such a warlock is bad luck - although this does not stop cocky champions from trying. [1]

Due to this, a Sorcerer Lord is often the most deprived of the Dark God's servants - to keep and extend this power they will commit any unspeakable act, make any ritual sacrifice and bargain with the daemonic, inevitably slipping further into insanity and mutation.[1]

Whilst most Sorcerers are less physically imposing, this does not mean they are any less capable of defending themselves - they can unleash bolts of warpfire, twist their opponents' form into myriad new and unsettling shapes, and even predict impending betrayal. They manipulate and twist the raw energies of Chaos, the very air around them being saturated with dark magic, flensing a man's soul and infusing his flesh with daemonic power uttering but a single incantation.[1][2c]

Among such power is the ability to grant themselves and their allies oracular visions of the future, allowing them to defend themselves against incoming blows.[2a][2b][2c][2d]

All Chaos Sorcerer Lords know the Arcane Bolt and Mystic Shield spells. Those on foot or mounted on Chaos Steeds know the Daemonic Power spell, while those on the back of a Manticore know the Wind of Chaos spell.[2a][2b][2c][2d]

Chaos Familiars are small creatures who amplify the spellcraft of the Chaos Sorcerer Lords in battle.[3]

To redress their perceived physical frailties, a Chaos Sorcerer Lord will often seek to even the balance by enslaving a Manticore to their will. Unlike Chaos Lords, sorcerers do not break the beasts through force alone - they employ spells of binding and mental domination to enthral the beasts and force them to submit to their will. This does not always work - and more than one warlock has met a grizzly end after attempting to force servitude onto a particularly stubborn Manticore, or letting their magical control slip. Yet the risk is well worth the reward for many, as those who manage to successfully bind such a creature find themselves with a mount that responds almost instantly to their every whim, furiously tearing the foe apart while the Sorcerer Lord is free to work their magic unimpeded.[1]

Some ride to battle on the back of Chaos Steeds.[2a]

Those that ride on the back of Manticore prefer to wield Sorcerous Reaping Staves.[2b][2d]

Chaos Sorcerer Lords can have the following Marks of Chaos: